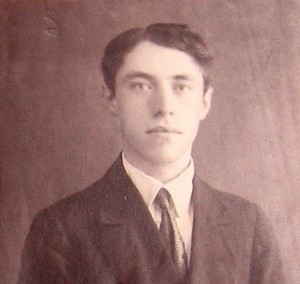 Osyp (Yosyp) Lvovych Veanshtein began the career of the scientist, erudite, beautiful expert on sources in Odessa, in the Central scientific library (the former library of the Novorossiysk University.

The native Bender, O. L. Vainshtein ended the Odessa private men’s gymnasium of G. Rappoport and in September 1915, he was enlisted on historical office of historical and philological faculty of the Novorossiysk University. Brilliantly graduated from the university in 1919, Osyp Lvovych remained for preparation for a professorial rank at department of general history. While still a student, he taught in the Odessa gymnasiums and on an evening school, and in 1923 began the teaching activity at the higher school, giving courses of general history at Institute of national education and in other Odessa higher education institutions. At the same time it worked in the Central scientific library at positions of the scientific secretary managing bibliographic department (1924-1925), the deputy director (since 1930), at the beginning of the 30th – directors.

The expert Vorontsov and Strohanov funds kept in the library, O. L. Vainshtein published a number of scientific studies based on these materials, which have not lost their importance today.

Osyp Lvovych took an active part in the scientific life of Odessa of those years: he was secretary and one of the organizers of the bibliographic seminar at the Central Scientific Library, participated in the organization of courses for Bibliological “scribes” from 1925 was a member of the library board at the Institute of Public Education (successor disbanded in 1920, the University of Novorossiysk), actively contributed to the commission of the Odessa regional studies at National Academy of Sciences of Ukraine, the Odessa branch of the Association of Oriental Studies, the Society of Marxist Historians at the Communist Academy.

In 1935, Osyp Lvovych went to Leningrad where he by the invitation of the Leningrad University in July of the same year headed department of the Middle Ages, and several years was the manager of university library. At the same time, he became the head of one of departments of Institute of history of material culture of Academy of Sciences of the USSR and group of world history of the Leningrad branch of Institute of history of Academy of Sciences of the USSR. At this institute, O. L. Vainshtein worked until the end of his life.

In 1938 without protection to O. L. Vainshtein was appropriated scientific degree of the candidate of historical sciences, and in 1940 he became the doctor of historical sciences. As the doctoral dissertation, Osyp Lvovych protected work “A historiography of history of the Middle Ages in connection with development of a historical thought from the beginning of the Middle Ages up to now”. On protection by his opponents, there were famous historians academicians: Ye. V. Tarle, Ye. A. Kosminskyi, Professor S. N. Palk who gave appreciation of work of the scientist.

At this time, scientific activity of V. L. Vainshtein finally concentrated in the field of medieval studies. Many articles on Middle Ages history in Germany, Italy, France, and the fundamental monograph “Russia and Thirty Years’ War” (1949) became achievement of scientific activity of the scientist in the 30-50th. In 1951, during the company on fight against cosmopolitism, he was dismissed from a position of professor of the Leningrad University. Then he headed department of history at the Kyrgyz state university of Frunze.

Long-term scientific developments of the scientist in the field of a historiography were reflected in monographs: “The Western European medieval historiography”, “History of the Soviet medieval studies”, “Sketches of development of bourgeois philosophy and methodology of history in 19-20th centuries”. O. L. Vainshtein’s work in on-stage performance groups of such known editions as “World history”, the Great Soviet Encyclopedia, “The French year-book” where he was not only the author of scientific materials, but also the highly skilled editor was fruitful.