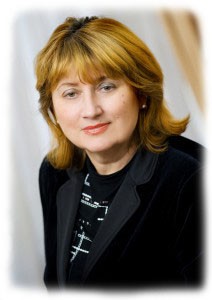 She graduated from biological faculty of the Odesa State University (1973), the Kiev institute of culture and arts (1991).  She held positions manager of sector of classification (1980), manager of department of scientific and bibliographic work (1985), scientific and methodical work, deputy director for scientific work (1989). During her management, the library became powerful information center, which has the considerable database and provides use of world network. The modernized processes of service of readers are provided modern types of service. Got a new paradigm and scientific work gained broader development. The library turned into an education subject, equivalent with other educational structures of university, institutes, faculties, departments with which it interacts on the principles of partnership. The scientific library has own printing product and issues the online scientific magazine of open access. The Archive – a repository of electronic documents of the Odesa National University which is registered in the world register ROAR (The Southampton university, Great Britain), in “the Index Repositories of Open Access” (The University of Nottingham, Great Britain) and in the Ukrainian register of repositories is created. This open electronic edition, which is created for the organization of access to world information resources and creation of digital collections of results of research materials of scientists of the Odesa I. I. Mechnikov National University.

Maryna Oleksiivna – the initiator of innovations on reorganization of structure of Scientific library. In work of Scientific library the new segment – responsibility for distribution of results of research work of scientists of higher education institution, carrying out scientometric and the bibliometrichnikh of researches, promotions of periodicals of university in national international scientometric bases is introduced. Monitoring of world information resources, collecting and the analysis of information about world and national rankings of higher education institutions is carried out.